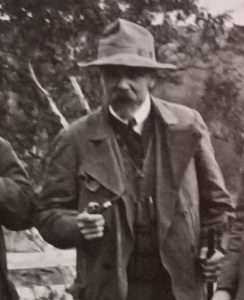 … was the wealthy son of an American steel magnate who decided to buy a house in a small town called Olden at the end of Nordfjorden in Norway.

He and his wife Anna spent their time in Olden between their travels back and forth to his home of Pennsylvania and also Holland.

Whilst in Norway, Singer produced a substantial quantity of Norwegian landscape paintings. Many of which can still be seen on the walls and lying about in his studio, almost as he left them.

William H Singer Jr perhaps could not claim to have been a major contributor to the Western avant-garde art canon, but nevertheless, if his time had been earlier, he may well have been identified with the Impressionist and Post-Impressionist movements.

Broad brush strokes, dynamic use of colour; form and structure – dramatically capturing the light playing on his natural surroundings.

Singer’s works epitomise what we imagine and experience of the Norwegian landscape. Humans dwarfed by the depths of the mountains, perhaps symbolised by the absence of figures in Singer’s works.

The narrative is the scenery.

Singer used his wealth to enhance his Olden community: building a hospital, supporting the school.

A philanthropic artist who did not live long enough to enjoy the country’s liberation from the Nazis and who maybe now should be recognised a little more.